In Warriors Don’t Cry one of the characters that I found very interesting was Danny. Danny was the soldier that was placed in charge of making sure that Melba or the other Little Rock 9 students were not killed at school. Acting as a personal bodyguard, he was there in hopes that it would discourage the white students around her from hurting her, though he was not meant to step in unless she was in big trouble. The more Melba got to know Danny, the more she counted on him to keep her safe. She listened to the advice that he gave her and learned how to handle the abuse after he had left. In Melba book Warriors Don’t Cry, there seem to be many similarities in the Melba’s relationship with Danny, and her relationship to God.

One of these similarities is when the soldiers started to leave the school, each night Melba would hope and pray that Danny would be there the next day to protect her. This was similar to the way that Melba would pray that God would do something to protect her at school.  She counted on both God and Danny for protection. Another thing that made me think that Melba’s relationship with Danny was similar to her relationship with God was how Danny would walk a few feet behind her. There was a distance between Melba and Danny but she still had faith that he would step in and save her if she needed it. This is again similar to Melba knowing that even though she could not see God, he was watching over her and making sure that she would survive. In Chapter 16, after a boy sprays acid in Melba’s eyes, Danny saves her from being blinded. At the end of the chapter, Melba writes in her diary “‘Thank you, God,’ I whispered, ‘thank you for saving my eyes. God bless Danny, always.’ ” She is crediting both God, and Danny for saving her eyes. 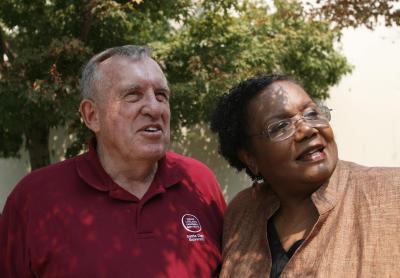 Here is a picture of Danny and Melba, many years after walking the halls of Central High School together.

3 thoughts on “Danny and God”